See the Wiki for downloading either version.

uncle_bob
thanks for the info and the pic. I plan to feed VRS once my setup is finalized. I still have holes in my coverage area due to the stubby antenna and its' poor location. Glad to hear that a 10 meter cable is working for you. That is about the length of cabling I will require from my homemade roof antenna. I had read that 6 meters was about the USB limit.
Cheers - studebaker
http://kerrentweather.ca
http://kerrentweather.ca
Top

studebaker wrote:uncle_bob
I had read that 6 meters was about the USB limit.

This USB cable has a repeater chip in the middle of it.
Interested in building your own Weather Station? Maybe check out the WeatherDuino Pro Project Here
Conder, Canberra Weather

I ordered a repeater cable yesterday, which hopefully will be here next week. I would like to get it all together before the really nasty weather gets here. Wouldn't like to fall off an icy roof!
Good evening - studebaker
http://kerrentweather.ca
Top

Got my repeater cable today, which allowed me to raise the "stubby antenna" approximately 6 meters directly above its' previous location thinking this would/could/should only improve my coverage area. Wrong wrong wrong

Much better coverage (albeit with some holes) when "stubby was only 3 meters above ground vs new placement at 9 meters. As an air traffic controller, I never understood the "mumbo jumbo" of radio/radar.......when there was a problem we asked for a technician and problem solved.

Sure wish a tech was available now.

Still waiting for the MCX to BNC adapter which will allow me to connect to my homemade coax/collinear antenna vs the "stubby". Not sure if that will help but worth a try.

If not , it's back to the drawing board

studebaker wrote:Got my repeater cable today, which allowed me to raise the "stubby antenna" approximately 6 meters directly above its' previous location thinking this would/could/should only improve my coverage area. Wrong wrong wrong

Much better coverage (albeit with some holes) when "stubby was only 3 meters above ground vs new placement at 9 meters.

It's quite possible that you have a ground plane (excuse the pun) issue.
Something like these radails may help..

I'm no expert on antenna's (or any thing for that matter

) so you might need to google up.
Interested in building your own Weather Station? Maybe check out the WeatherDuino Pro Project Here
Conder, Canberra Weather

Hi guys, I see that you have been busy since my last visit. I've attached a couple of pictures for a very simple to make "cantenna". It gives much better range than the stubby that comes with the dongle. The Red Bull is my version. Add some waterproofing to the joint where the wire pushes into the F connector. Original idea from a guy in Toronto with the nic of abcd567. He is an antenna/electronics whizz.

You do not have the required permissions to view the files attached to this post.

Finally received the MCX to BNC adapter and tried my homemade coax/collinear antenna. Looks promising I think, but would like to improve lower altitude coverage. (Screen shot attached showing coverage area). Antenna was temporarily mounted on my garden shed and somewhat shielded by houses. Plan is to mount it on the house roof once I figure out best routing for cable etc and the weather improves. May have to wait several months for better weather

Temp currently hovering around 0 C with light snow showers. Interested in learning more about the satellite amplifier.
Cheers
You do not have the required permissions to view the files attached to this post.
http://kerrentweather.ca
Top

There are loads available on ebay but they need to cover 950MHz to 2050MHz. The important bit is 950MHz as the lower end.

The DC blocker is to protect the amp in case of a short in your antenna. If you can't find a DC blocker you can use another power inserter (just don't feed the "In" with any power 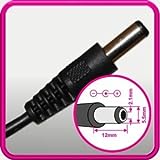 Put the amp as close to the antenna as you can. The piece of coax between the amp and the power inserter can be as long as you need.

Thanks for the very informative reply. I'll rummage through my bin of old electronic goodies, as I may already have an ac to dc adapter. Will order other items from ebay and have a go at putting it together.
Cheers
http://kerrentweather.ca
Top

I am rf/microwave engineer and have some info to others to that topic. I am personally living in Prague, Czech Republic and the air traffic over Europe is quite dense, inclusive the capital. The signals from the transponder on the airplane is very strong and in case of having airplanes in high elevation around a simple quarter-wave groundplane antenna which has better receiving parameters for such use, if top half of the sphere radiation diagram is needed. The few dBs of gain of colinear antenna does not bring too much. It is known that with a transmit power of few tens of miliwatts it is possible to receive satellites on the 300-1000km distance, so greater problem is to have a free horizon to have a good propagation (or visibility) to be able to receive the airplanes.

Concerning the DVB-T RTL dongles, there are some known facts, which I would like to stress. The dongles have inside some broadband receiver (Elonics E400 or RTL820- which is better for airplanes). This receiver has high sensitivity, but is very prone to overloading, it includes inside some form of automatic gain control, which prevents the input from overloading. In case of presence of strong signals from UHF band (TV), the input is getting overloaded and the sensitivity of the dongle is influenced.
I mostly recommend some form of filter on the input to prevent strong signals to enter the receiver outside of the desired band, a shorted quarterwave stub tuned on 1090MHz could help in simple cases, in case of greater problems some bandpass filtering is needed.
The second problem to be aware is, that in some dongles there is no static electricity protection on the antenna input, so any rougher static discharge or some induced electricity from lightning could simply destroy the input.
It is good to open and verify, that there is a protection diode on the input, which is used as primitive protection, altough the shorted quarterwave stub is much more foolproof.
Regards and success with receiving,
Zetka.
Top

zetka, many thanks for your input. Not sure I understand what a shorted quarter wave stub is, I'll look it up.

Can I point you at a very, very long discussion on the FlightRadar24 website about the "Best Antenna" for 1090Mhz. I'm sure your knowledge will be appreciated there. http://forum.flightradar24.com/threads/ ... st-antenna

Anyone else interested in getting the most from their dongle setup should take a look too. Hard work but rewarding.

I knew nothing about any of this until about a year ago. I've since built over 20 antennas (mostly rubbish) but I've now built a 24 segment Coaxial Collinear which gives me 200 nautical mile range. I'm almost satisfied.

I know this is an old thread but I just took up the bait of ADSB feeding. Primarily to FlightAware, but have added FlightRadar24 and Planefinder.

Anyone else doing this?

I'm running a ADS-B receiver along with CumulusMX on the same RasPi.
Using FlightAware dongle, antenna and 1090Mhz filter.
Don't have a lot of air traffic around the Cape Town skies, but still great to look at the aircraft flying around.
Top
Post Reply
28 posts