See the Wiki to download the software or click on the Downloads link in the Forum Banner.

I was getting tired of trying to build up the walls of my Fine Offset (FO) rain gauge to get it as accurate as my Stratus Rain Gauge so I decided to take drastic measures. I performed this mod a few days ago and it rained yesterday. The Stratus reported 1.34" and the FO reported 1.39" after the mod so I just re-did it so I could take pictures of the process.

WARNING: This is not a pretty mod so if you have an eye for beauty, do something else. If you crave accuracy, then proceed.

What you will need:
Many hardware stores sell pre-cut PVC pipe in about a 2' length. This is more than enough to do this mod. Use a pipe cutter to cut out a section of PVC pipe depending on the length of your oil funnel's spout length.

1.jpg
2.jpg
Here are a few more pictures of the oil funnel I used. It is an old one I had laying around so I have no UPC to share. Notice the spout is straight and is 0.5" across to is slides into the PVC pipe perfectly and snugly:

Once you are absolutely sure the PVC pipe is level, straight, and centered (this is important), go ahead and glue a seal around the outside of the PVC pipe to keep water from seeping into it. This will not look too pretty. Also, MAKE SURE NO HOT GLUE SEEPS INTO THE BOTTOM OF THE PVC PIPE:

7.jpg
8.jpg
9.jpg
Did you notice that duck tape in the last picture? I forgot to take a picture of the PVC pipe centered over the rain sensor cover's hole prior. Anyway now is the fun part which adds even more to the ugliness: duck-taping!

First you will want to take two pieces and go longways with the tape going up the PVC pipe slightly:

10.jpg
TO BE CONTINUED DUE TO ATTACHMENT LENGTH...
You do not have the required permissions to view the files attached to this post.
Last edited by Buford T. Justice on Thu 01 Aug 2013 5:21 am, edited 2 times in total.
libudev.so.0 Fix For Ubuntu Linux Distros
BT's Global Sager Weathercaster PHP Scripts For Cumulus
BT's Global Zambretti Weathercard Forecaster PHP Scripts For Cumulus
Top

Now take smaller sections of duck tape and go crossways. Notice the duck tape near the spout is domed up so water will run off of it and overlaps:

11.jpg
Rip a small section of duck tape in half longways and tape around the PVC pipe:

13.jpg
OK. That is not too bad-looking. It doesn't have to be a work of art to function. Now place your cover back onto your rain sensor:

14.jpg
Slide the oil funnel into the top of the PVC pipe and level the funnel onto your hopefully already leveled rain sensor you should have leveled when you installed it:

15.jpg
Here is the finished product next to my Stratus rain gauge:

16.jpg
As I said in the first post, the Stratus measured 1.34" and the FO measured 1.39". I am going to wait until it rains a few more times to make sure it is still over the same amount. If it is, I might take out this oil funnel and cut it down a little bit until they both agree or try a smaller funnel. This is why I didn't hot glue the oil funnel to the top of the PVC pipe. It is snug and tight enough to not leak though a good gust of wind could take the oil funnel on a trip. I am not too worried about that happening. Replacement oil funnels are cheap.

I went ahead and taped around the rain gauge cover to make it look prettier:

Did you choose a funnel with a diameter that would in theory correct for the difference, or are you using a multiplier in Cumulus?
Steve
Top

steve wrote:Did you choose a funnel with a diameter that would in theory correct for the difference, or are you using a multiplier in Cumulus?

Neither. I am just winging it trying to get a match to the Stratus rain gauge. I am kind of OK with the 0.05" difference, but I want to have no more than a 0.01" difference. I have access to several small funnels so I hope to eventually get a match I can share with everyone here. I am pretty close now without modification to Cumulus.

Prior to the mod and when I first got my Stratus rain gauge, I was having differences as low a 0.15" and as high as 0.60+". I think the funnel solution is definitely the way to go. It is just a question of finding the perfect size.
libudev.so.0 Fix For Ubuntu Linux Distros
BT's Global Sager Weathercaster PHP Scripts For Cumulus
BT's Global Zambretti Weathercard Forecaster PHP Scripts For Cumulus
Top

I used plastic from vertical blinds to build my wall around the inside perimeter of the rain gauge which is a fine offset. The plastic vertical blinds bend very easy. Then apply glue on the outside plastic of your vertical blind and voila you have a higher wall and could catch any rain that comes down like cats and dogs. Ohh one more thing, use a staple gun to attach your ends of your plastic blind then apply your glue along it to make sure no water gets in.
Top

I think sunlight would eventually make the vinyl go brittle wouldn't it?

A bunch of rain is suppose to be coming my way starting tomorrow so I will get a few opportunities to see how the current funnel is doing:

Yes. You've asked this question before.

I forgot. Nobody is perfect, lol.

We didn't get nearly as much rain as was predicted. We had a light shower this evening lasting about 40-50 minutes. Stratus says a little above 0.10". FO says 0.09". Perhaps there is not quite enough rain in one of the FO buckets to tip it to 0.10", but it may be close to doing so.
libudev.so.0 Fix For Ubuntu Linux Distros
BT's Global Sager Weathercaster PHP Scripts For Cumulus
BT's Global Zambretti Weathercard Forecaster PHP Scripts For Cumulus
Top

It has been boring rain-wise here and no rain is expected anytime soon. The last time it rained a few days ago, both gauges reported 0.05". I am thinking the current funnel is pretty close to perfect. It is certainly better than the unmodified FO rain gauge.

Regardless, tipping buckets cannot measure rain as accurately as a manual rain gauge. Tipping buckets are good for intensity though. This video was interesting in that regard:

This mod is still going strong. The only addition I had to do was find a way to keep debris and bugs from going down the funnel and getting trapped on top of the plastic screen of the rain gauge. I wanted something that would minimally impede rain intensity. I found tobacco pipe screen filters and used a pencil to shove one down the funnel of the spout. I have to take the spout off from time to time to blow debris off the top of the pipe screen, but so far so good:

IMAG0072.jpg
Rain amounts usually agree with my Stratus rain gauge. I do have to make a correction in Cumulus every once in awhile. Sometimes the Stratus has more and sometimes it has less but the amount of variance is minimal. I would recommend everyone have a good rain gauge for actual measurements. It rained about an hour ago and both rain gauges say 0.06"

Inspired by BT's elegant mod I've had a go myself: 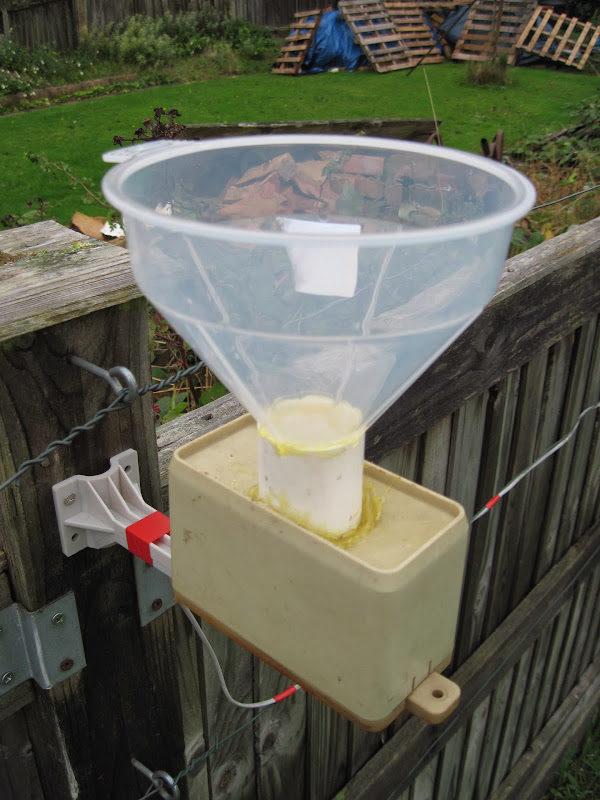 This is a temporary installation, to run it in parallel with my other unmodified gauge for comparison. Next year I'll be relocating most of the station sensors away from the fence and making a more rigid mounting for the rain gauge.
I also need to give some thought to keeping muck from going down the funnel.
Jim
Top

One thing to watch Jim. Those transparent funnels soon go very brittle with the UV, mine got a 'micro crazed' look after about a year, any pressure and it fell apart.
Mark
Wilmslow Astro Weather
Top